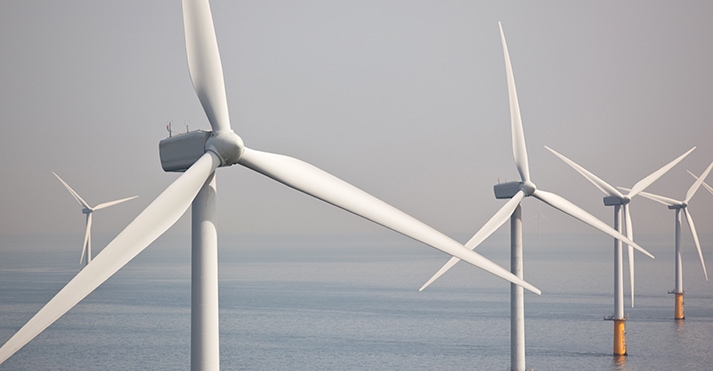 When the blades of the five turbine, 30 MW system started turning off the coast of Block Island, history was made – the first U.S. offshore wind farm was up and running. And now other projects may follow.

‘Offshore wind’ is wind turbines installed and operated in the ocean, usually on the continental shelf, to generate electricity through wind energy. Offshore wind is an attractive renewable energy resource because of its abundance and consistent, strong wind speed. More than 91% of the world’s current offshore wind power is off northern Europe, in the North Baltic and Irish Seas, and the English Channel. (source: Global Wind Energy Counsel). Offshore wind is still a very new technology, representing just 3% of the global installed capacity within the wind sector, but more projects are in development around the world.

So what’s driving the rise in offshore wind development in the U.S.?

According to the Department of Energy, “Coastal and Great Lakes states account for nearly 80% of U.S. electricity demand, and the winds off the shores of these coastal load centers have a technical resource potential twice as large as the nation’s current electricity use.” Projects are developing around the eastern coastline specifically, due to the strong winds and shallow waters, and state policy changes over the last decade. The eastern coastline provides a unique opportunity given its characteristics; turbines can be placed further out to sea where they are virtually out of sight and sound range and can harness the strong winds. On the policy side, many eastern states have been creating policy in support of renewable energy resources. For example, in New York Governor Cuomo’s, Reforming the Energy Vision, a comprehensive energy plan, set a goal of procuring 50% of the state’s power mix from renewable resource by 2030, with 2.4 GW coming from offshore wind. In Rhode Island, the state’s renewable portfolio standard has a goal of supplying 16% of electricity from renewable resource by 2019, and in Massachusetts, utilities have been mandated to diversify their portfolio and procure energy from offshore wind.

Other offshore wind projects include:

While offshore wind farms are potentially a promising new renewable energy source for the U.S., the time frame from concept to completion is lengthy and the costs are relatively high compared to other options. At Usource, we believe an approach of utilizing fossil fuels, nuclear power, and new renewable sources, are all required to achieve the right balance of economic and environmental goals.  If your organization is looking to capture the environmental attributes associated with renewable energy Usource can help. From performing onsite solar feasibility studies to procuring renewable energy certificates, Usource can work with you to meet your organization’s energy goals.